It’s always interesting to get a glimpse of renowned mangaka’s talent, headspace, and style in bite-sized form, outside of The One Work that made their name.

While our first exposure to most authors usually comes through their long-form smash hit, I believe that the ideal way to truly understand an author is through a reading of their short story collection. It’s a bit like the comparative experience of listening to a musician’s full album vs. their hit single; you understand their range and musical personality better through the former. Similarly, while you may love/hate a novel by someone, it’s not necessarily an accurate predictor for your subsequent reaction to their works—it’s through a shorts collection format, which tends to showcase their art in a more raw, diverse, and editorial-free form, that we can get a better idea on what an author is really capable of and how much we are attuned to their style.

In terms of manga, getting on a hold on shorts/one-shots anthology can be a bit difficult (unless we’re talking about shoujo romance). Still, some time ago I managed to acquire the anthology works by three very remarkable mangaka, each of them boasting an impressive body of work that had left profound impact on many.

ANYTHING AND SOMETHING (Kaoru Mori)

Out of these three, Mori-sensei is the only one whose serialized work I haven’t read (hopefully this won’t be the case for much longer). One thing I know, though: it’s virtually impossible to look at a random image of her art work and not having your jaw drop all over the floor as a result.  Creator of among others, Victorian drama Emma and exquisite cultural masterwork A Bride’s Story, Mori might be the best period drama mangaka at present—her astounding level of details alone is enough to warrant such designation.

Suffice to say though, you don’t necessarily read Anything & Something for the story themselves.  It’s basically random assortment of disjointed narrative, mini-comic for promotional purpose, and random sketch that broadcasts Mori’s many interests and fetishes such as:

Don’t get me wrong; these are great stuff. These are all pieces where Mori’s superior art and story-telling capability still manage to shine through, interspersed between portions of random ramblings that might as well be the main feature of this book. I was impressed by her paneling (most notably in the simple but effective To Come to See), enthralled by her ultra-passionate 10-page long essay on Victorian-era corset and fireplace, and let out a hearty chuckle at a strip that’s basically just ‘LOOK AT DEM NICE BUTTZ’. Seriously though, she can draw some really sensual curves.

Granted, I utterly failed to comprehend the longest story in this collection (Sumire’s Flowers, in which Mori supplied the illustration for Satoshi Fukushima’s story), and anyone expecting a collection of satisfying fully-rounded narrative would probably end up disappointed. Taken as ‘Fun Times & Random Chat with Kaoru Mori’ experience though, it’s a fun ride. A choice quote from the wonderfully sheepish author by the end of the book:

“So, do you like this book? More to the point… how is it? Have I ruined your image of me (*especially for those who have only read A Bride’s Story)? …..I drew everything here carelessly without thinking about anything, and so when this was compiled into a book…. (I ended up asking myself) what is this? What is this? Who is this?’

I, for one, really enjoy the cut of your jib, Ma’am.

A bit of nostalgia about One Piece: I read the comic and watched the anime (in Sunday morning telly, no less) in early 2000s, although only up to the end of Arlong arc. At the time, I liked it a good deal, although I didn’t quite fall in love with it. When I took a rain check on the series, I thought to myself, “Well, once I’m a working adult I’ll go back to this series and collect all the comic; bet it’s already finished by then.”

Anyway, I imagine there’s a parallel universe where instead of one uber-long series about pirates, Oda makes several serialized works starring the likes of cowboy, samurai, and monk. It’s a world where I can actually read a lot of him, instead of having to dedicate myself to the 80+ volumes of a manga (or 700+ anime episodes); a commitment that demands the kind of passionate love I can’t offer to the series. Wanted!  is a window offering a glimpse of such alternative world, in which Oda let loose with a variety of settings and heroes, unified by the distinct sensibilities that made him such a household name.

Originally written and compiled in the 1990s, the award-winning Wanted!  put Oda on the map and paved the way to his future success. It may lack the polish and detail that his art will eventually evolve to, but even then his strengths are already apparent: zany expression, good sense for comedic timing, and earnest dramatic moments. One Piece fans already know this, but I believe no one can draw a more heartfelt crying scene than Oda, who has the capacity to make his characters look simultaneously hilarious and heart-breaking.

The five stories here feature the familiar shounen action scenario of a protagonist finding himself in a sticky situation and/or fighting cartoonish bad guy, but there’s certain funkiness in them that distinguish Oda from your run-of-the-mill writer. His protagonists are neither stoic (read: boring) badass nor wimpy pushovers, being capable men with some sort sort of underdog charm (as well as endearingly exaggerated reaction faces) that makes them instantly likable; whether it’s the goofy dual wielding gunman in Wanted, the heroic but incorrigible pickpocket in God’s Gift for the Future, the easily frightened exorcist monk in Ikki Yako, the deadbeat vagrant in Monsters, and of course, the pirate wannabe kid who can’t swim in Romance Dawn.

Romance Dawn would end up being a prototype to the one of the most epic, best-selling, and popular manga ever created. Even as I wonder what could’ve been, it’s hard to argue that this is the best timeline for Oda—it’s no small feat to produce something beloved by millions of people worldwide, you know. 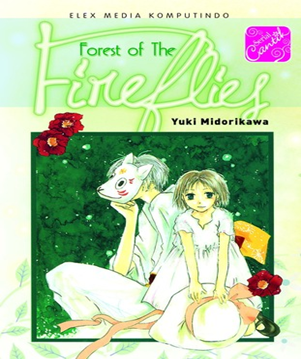 FOREST OF THE FIREFLIES (Yuki Midorikawa)

This is Midorikawa’s fourth collection of one-shots, published just before her first serialized work (and the most successful one to date) Natsume Yujincho. The quartet of stories is accordingly themed after the four seasons, and it’s the kind of theming that I always like since I read Stephen King’s Different Seasons. It fits well with the author’s narrative and art style, too.

The eponymous story representing the summer, Forest of the Fireflies, is probably Midorikawa’s most renowned non-Natsume story and deservedly so. Depicting a bittersweet love story between a human girl and an ageless youkai, it represents the kind of story she does best: a collision between physical and supernatural realm, a relationship framed in the participants’ understanding of its temporary nature, and a climax that brings in a powerful swell of mixed emotion. Just like the best stories in Natsume, every panel and line of dialogue hit a perfect note.

The other three (non-supernatural) stories are not as impactful, but I still consider them a cut above your garden variety shoujo romance one-shot. The first story (spring), Overhearing a Flower Song, is a decent high school love story that shines through its humble and heartfelt characterization, while I also have a soft spot for the sweetness of the third story (fall), The Falling of Autumn Leaves, in which a rowdy girl vows to protect the boy she loves.  The last story (winter), Deepening the Scar, has an incest overtone between kids of divorced family, and it’s obviously a point of contention. However, I eventually see it as a painfully honest story that does not necessarily endorse or romanticize such relationship.

It’s worth considering that I may not like these stories as much if not for Midorikawa’s execution. I happen to really dig her style; the sketch-like, gentle, line work that invokes the sense of fragile ephemera, as if the characters can fade away and disappear at any given time. It fits her subject matter exceptionally well, as does her delicate choice of words in both the stories themselves and the always heartfelt author’s notes (aptly translated in the edition I owned, thankfully). I don’t really follow many shoujo mangaka these days, but she, along with Keiko Suenobu, stand out as my favorite among the currently active ones.