A recent conversation I had:

Q: So, this Osomatsu-san thing. What it’s about? I guess it’s the usual cute girls doing cute stuff, but with boys?

A (Me): It’s a show about thrash people being thrash and doing nasty things to each other. Some people did find that very cute, I guess. Also, top-notch poop and dick jokes.

And so, I settled to watch the ninth episode to get my usual fix of vicious black humor, only to be overwhelmed by genuine suffering and pain. Yet, it’s also a display of tremendous grace and warmth, of the show baring the heart that it really always has beneath all the snark, mean spirit, and gleeful mistreatment of its cast. When Osomatsu-san is at its darkest, it’s also at its kindest.

I gotta say that this particular episode had me thinking about it for days (judging by the amount of fan art I’ve seen depicting the two central figures, so did many others), and after a week, eventually compelled me to express my feelings about it. It’s not only the element of surprise that made it so special; any gag manga worth its salt will always have its share of sentimental stories, even one that specialize in black humor like Osomatsu-san. It’ brilliant because of the elegance and understated nuances of the narrative, its pitch perfect audiovisual direction, and in how it completely nailed every joke and had those funny moments co-exist beautifully with the heavy theme.

Episode 9 of Osomatsu-san opens with another fairy tale skit and a segment featuring Karamatsu and Chibita (both were okay albeit not among the best works of the show), but the subsequent main course is what matters here. The selection of Jyushimatsu as the narrative centerpiece is a canny one: prior to this, he always struck me as the most one-dimensional among the Matsuno siblings, as constant and predictable as his dopey grin, and the least likely to extract any sort of dramatic weight from. Starting from the very amusing opening montage (which was in line with the usual depiction of lovestruck characters, except that instead of turning flustered and absent-minded, what counts as ‘abnormal’ for Jyushi is him being all mature and composed), the show wholly subverts that assumption, eventually showing glimpses beneath the clown’s make-up while simultaneously lending a sense of noble purpose to his ‘performance’. Plug in any of the other siblings to play his role in this story, and it just wouldn’t work nearly as well, even if you re-work the plot to fit their personality.

Then, there’s The Girl (unnamed, but I like the fan-christened ‘Homura’, a cute reference to Jyushi’s ‘sayonara, home run’ catchphrase), who’s just so lovingly designed down to her braid, the tiny freckles around her nose, her dress, and the way she laughed herself to near comatose state. Among a cast defined by their wacky eccentricities, she’s also the first character who has a significant ‘realness’ in her, and her issue is handled with respect and grace that it deserves. She’s a broken person, and God knows how long she went without having a genuine laughter before she met Jyushi. And it’s truly a fantastic symbiosis when the two happened: Jyushi had saved ‘Homura’, but she also provided a perfect outlet for someone like him—who, for all his sunny and energetic facade, had been swinging his bat all by his lonesome instead of playing in actual baseball game.

Osomatsu is another key figure here, and in a way, this story tells us about him as much as it does Jyushimatsu. Osomatsu has always been rather interesting in the sense that even though he’s the title character, he actually stands out the least among the sextuplets, aside from being defined as the eldest brother who (pretend to) hate his siblings. But, he really shines in this segment, being all thrashy, bitter, and hilarious (“what’s so special about that… I can squirt water from my nipples!”), but, just like the show itself, shows sensitivity and thoughtfulness when it really matters. Moreover, he got the best facial shots and reaction faces (a key strength of the show, I shall note) this time around, whether it’s the side glances, hesitation looks, or “damn that MUST have hurt” moment.

This segment excels in its reliance on implications and inferences, and that’s a pleasant thing to see from a show that usually has the subtlety of a jackhammer landing on your foot. Osomatsu’s discovery and subsequent decision. The rejection scene, a textbook example of visual story-telling that’s so well-executed nonetheless, down to the muted raindrop sound, the obscured faces, and the brothers’ disappointment. The Girl’s circumstances, the bandages, and the wristband. Nothing overly opaque, just a bunch of visual cues and things left unsaid, which only serve to strengthen its eventual impact once the connection is made.

For all the dramatic peaks, the comedy is also on top form here, the best since the glorious premier episode and perhaps even more impressive, considering the additional tonal juggling that it does with aplomb. As much as I adore the show, it’s sometimes guilty of drawing the joke for too long, doing too much lampshading, or simply misfiring with the punchline, but it’s never the case this time, with everything timed so perfectly. Whether it’s The Girl’s endearing quirk, the peanut gallery of Matsubros, or my personal favorite, the makeover montage that culminates in a blessing ritual and Jyushimatsu ending up with the default Matsu uniform, all of them land with great precision and shift seamlessly between mood without forcing the issue. One moment, I was laughing at Chibita cracking Osomatsu’s skull, a few seconds later my heart breaks along with Jyushimatsu’s. 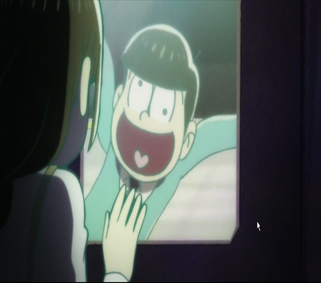 Finally, here comes the train scene, and it’s magnificent. Train has always seem like the Japanese’s preferred mode of transport in terms of evoking melancholia, and with my own sizable share of personal experience and memories, I can always relate with that. Give me a train station chase over an airport chase any day, and with the climax of this episode, Osomatsu-san joined the all-time pantheon of Heart Breaking Train Scenes along with Brit film Brief Encounter and 5 Centimeter per Second.

Just a beautifully executed sequence aided in no small part by the choice of music, as well as a realist’s take of a resolution that’s still brimming with overflowing sympathy nonetheless. When Jyushimatsu races with a freaking bullet train in a desperate attempt to cheer up the girl, it’s a callback to what Osomatsu said at the beginning of the segment (“That’s Jyushimatsu for you… even if his jokes utterly fail, he will never slow down.”), and it all pays off when the tears finally gave way to a beautiful laughter. I was a little worried that the show might pull away at the last second, doing the usual mood-deflating trick typical of a gag series that basically says “okay, let’s not get TOO serious here”, like the last shot of limping and abandoned Karamatsu in the end of Esper Kitty segment. But, as I’ve noted before, the tonal balancing is on point this entire time, leaving the final stage to these two great characters and simply ride with the moment until the very end with that unforgettable perfect shot.

There are countless tear jerker episodes in anime and other media, but this is among the more special ones. It’s an emotionally intelligent piece that deviates from the show’s usual formula while not compromising its identity and strengths, and one with affecting underlying messages.

We’re all the ‘Homura’ to the showrunners’ ‘Jyushi’; in the times of darkness, it means the world to still have someone who can make you laugh, and to be able to make someone laugh at your silly and elaborate gags.